Please click on the links below to learn more about TSHP’s award-winning individuals!

Ron Braden, PharmD, of Memphis, Tennessee, was awarded the “Distinguished Service Award.”  Sponsored by Cardinal Health, the Distinguished Service Award recognizes sustained service and accomplishment for a career of 20 or more years in the pharmacy profession. It is presented to a pharmacist who has made significant contributions in the area of health-system pharmacy practice, research and/or publications; implemented innovative approaches to practice; and achieved professional standing in the community and health-system practice.

Dr. Braden’s primary duties included provision of comprehensive pharmaceutical care services to the patients of the Surgical Intensive Care Unit, Director of the Antibiotic Surveillance Service, Director of the Pharmacokinetic Monitoring Service and numerous administrative positions including Interim Chief, Pharmacy Service and Interim Inpatient Supervisor at the VAMC Memphis. He was involved in numerous research projects in the areas of Critical Care, Infectious Diseases, and Cardiology pharmacotherapy and published extensively in the professional literature. He is active in local, state, and national pharmacy organizations and has held numerous elected positions as well as serving on professional committees.

Since retirement, Dr. Braden has rejoined the faculty at the University of Tennessee College of Pharmacy as Clinical Associate Professor of Clinical Pharmacy were he serves as didactic lecturer, course facilitator and clinical preceptor for Doctor of Pharmacy students and participates in research with other university faculty as requested.

In his spare time, Dr. Braden enjoys traveling with his wife Bonnie, fishing and golf with friends and serving as grandfather to his 2-year-old grandson. Dr. Braden also continues to be active in local civic and church activities.

Health System Pharmacist of the Year

Jonathan Hoover, PharmD, BCPS, CGP, of Adamsville, Tennessee, was named “Health-System Pharmacist of the Year.” This award is presented annually to a pharmacist in recognition of significant contributions to the profession of pharmacy and hospital practice; development and implementation of advanced hospital pharmacy practice, programs, research, and/or publications; personal enrichment endeavors through specialized training and advanced degrees; and demonstrated leadership qualities.

Dr. Hoover received his Bachelor’s degree in business management from Union University in Jackson, Tennessee and his Doctor of Pharmacy degree from the University of Tennessee College of Pharmacy in 2005. He completed a general practice residency at the Veterans Affairs Medical Center (VAMC) in Memphis. Since 2006, Dr. Hoover has served as a Clinical Pharmacy Specialist with the internal medicine service at the VAMC, Memphis. In addition to his membership in the Tennessee Pharmacists Association and Tennessee Society of Health-System Pharmacists (TSHP), Dr. Hoover is a member of the American Association of Colleges of Pharmacy, American Society of Health-System Pharmacists and the Memphis Area Pharmacists Association. He also serves on several committees including the TSHP ad hoc Education Programming Committee. 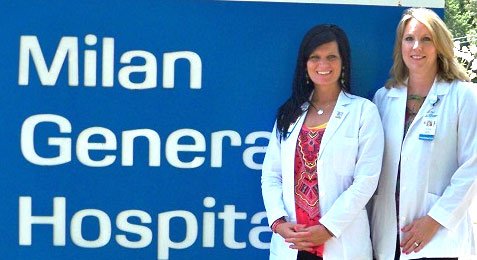 Milan General Hospital Pharmacy, in Milan, Tennessee, was presented with the “Innovative Health-System Pharmacy Practice Award.” This award is given annually to a pharmacy department staff in a hospital with fewer than 100 beds, in recognition of efforts which advanced the level of pharmacy services within the past 24 months.

Milan General Hospital is a 70-bed hospital located in Milan, Tennessee in Gibson County.  The pharmacy staff includes one pharmacist, Pharmacy Manager Alison Warren, PharmD and one technician, Heather Carter CPhT.  In the last 18 months, under the leadership of Dr. Warren, the pharmacy has implemented Computerized Physician Order Entry, Point of Care Barcode Scanning System for Medications, Electronic Documentation / Reconciliation of Home Medications, and Clinical Decision Support Rules and Alerts to improve patient safety. With these changes in place, and the addition of the Hospitalist Program, the hospital has been able to better serve an increase in hospital admissions and volume after the closure of two other hospitals in the same county.

Milan General Hospital also serves as a preceptor site for Introductory Pharmacy Practice Experiences pharmacy students from Union University School of Pharmacy. With inpatient services, as well as the Employee pharmacy, the pharmacy team takes time with each student to ensure each is experiencing as many areas of hospital pharmacy as possible and encourages interactions between students and all members of the health care team at the hospital.

The Department of Pharmacy at Baptist Memorial Hospital, in Memphis Tennessee, was presented with the “Innovative Health-System Pharmacy Practice Award.” The award is given annually to a pharmacy department staff in a hospital with more than 100 beds, in recognition of efforts which advanced the level of pharmacy services within the past 24 months.

Over the last 2.5 years, under the leadership of its newly promoted Director of Pharmacy, Dennis Roberts, the Pharmacy Department at Baptist Memorial Hospital, Memphis has undergone many positive changes within the flagship hospital and the 14-hospital system. The pharmacy department has moved to a decentralized model allowing many of the highly qualified pharmacists to move from the inpatient area out to the floors to be more visible, more participatory and of better, immediate service to nurses and ancillary staff. The inpatient staff assists with everything from providing services to the Ambulatory Care Center, Stem Cell Center, Heart Hospital as well as off-site physician practices. The clinical pharmacy specialists have assigned work areas (Critical Care, Cardiology, Transplant, Internal Medicine, Oncology, Stem Cell, Infectious Disease and CVICU) that they are responsible for on a daily basis. They are also the pharmacy departments’ representatives on all associated physician led service line committees.